What Can Be The Acne Causes?

Answers to your questions

Can what I eat cause acne breakouts?

Not exactly! At least not in the way you might think. Anecdotal associations between acne and particular foods like chocolate, ice cream and pizza have been discredited by scientific research.

Researchers have shown that people whose diets include lots of high glycemic index foods (foods that are high in sugar and simple carbohydrates)  tend to experience acne at a greater frequency than those who have low glycemic index diets.  However, there is no clear scientific consensus on why this connection exists. Some experts believe that high glycemic index diets may have negative impacts on hormone balance and the immune system.

Reality: The grease that you eat isn’t the “grease” that makes your skin oily. The substance that makes your skin feel and look greasy is not actually grease at all – it is a natural substance called sebum.  The purpose of sebum is to moisturize and protect the skin.  Sebum is produced by a specialized structures called sebaceous glands, which are located deep inside of hair follicles.

Sebum is produced from the break-down of sebocytes, which are the specialized cells that make up the sebaceous gland.  Sebocytes are rich in lipids (fatty acids) and triglycerides (fats and oils). The sebocytes nearest to the hair follicle die and then dissolve, releasing their contents into the hair follicle. The faster the sebaceous gland proliferates (grows), the faster this process of cell death and sebum production takes place, and the more “oily” the skin becomes. But eating more fat doesn’t necessarily cause this process to happen any faster.

Genetics, hormones, stress and environmental factors are much more important players than consumption of fatty or greasy foods. It’s also important to note that oil is a generic term for a diverse class of molecules.

The oils (lipids and triglycerides) in sebum are not the same as the oils that you consume when you eat things like fried foods. There are a lot of intermediate steps between the consumption of dietary oil and the synthesis of sebum, and this makes a direct connection between the two unlikely.

Does Chocolate Cause Acne Breakouts?

Reality: No, chocolate itself has not been shown to have a direct connection with acne symptoms.   However, many of the products containing chocolate are also high in sugar or high-fructose corn syrup, and are therefore high glycemic index foods.

As we mentioned above, diets that are rich in sugar and simple carbohydrates may aggravate acne vulgaris.    Further complicating matters, chocolate is generally a mixture of ingredients, and different kinds of chocolate can have a dramatically different composition of ingredients.

It is possible for people to develop allergic reactions to particular foods, including chocolate, and these reactions can produce acne like symptoms. However, most cases an allergic reaction would also have additional symptoms including, itching, hives, throat swelling, fever, rash, joint pain, etc. 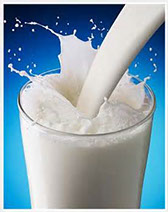 Reality: Allergic reactions aside, people have blamed a lot of medical conditions on milk consumption. There is a large group of people who swear that by stopping milk consumption they were relieved of a range of medical problems, from respiratory infections to acne vulgaris.

There are a handful of studies that suggest a relationship between high levels of milk consumption and increased incidence of acne. The authors of these studies suggest that it is possible that hormones in the milk (or hormones stimulated by milk consumption) may be to blame. A particular hormone called Insulin Growth Factor 1 (IGF-1) is present in milk and can cause changes in metabolism and hormone balance.

Milk consumption may also impact the balance of other groups of hormones, like androgens and estrogens (male and female sex hormones).  Several studies have demonstrated that elevated androgen levels are associated with more sever acne symptoms in many patients.  It is also possible that people with certain types of milk allergies could exhibit acne-like symptoms.  However, in cases of milk allergies, the symptoms are not really the same as normal acne vulgaris.

In conclusion, there is some evidence that milk may contribute to symptoms of acne vulgaris, but the exact relationship between milk and acne is not well understood.  Regardless, for many people it’s worth a shot to cut milk out of their diet for a few weeks and see if that helps improve their acne symptoms.